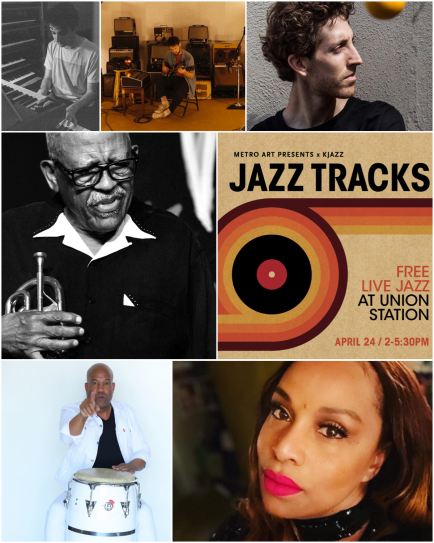 VIEW ON Eventbrite AND SAVE THE DATE Admission is free and first come, first served (no RSVP required)

Metro Art Presents, in collaboration with KJAZZ, is excited to present the second installment of Jazz Tracks at Union Station, in celebration of Jazz Appreciation Month, featuring

The concert will take place outdoors in two of Union Station’s historic patios– along with a surprise bringing live performance back to the Station’s Waiting Room! Hosted by KJAZZ's José Rizo and Rhonda Hamilton, the free event will spotlight performances by Bobby Bradford and Friends in a complete performance of Bradford’s original work Stealin’ Home - A Jackie Robinson Suite, Los Angeles-based musicians and producers Sam Gendel/Blake Mills/Benny Bock in their first show together, and Latin jazz from De Leon Division featuring vocalist Maiya Sykes.

Bobby Lee Bradford is a legendary jazz trumpeter, cornetist, bandleader, and composer. In addition to his solo work, Bradford is noted for his work with John Carter, Vinny Golia and Ornette Coleman. In October 2009, Bradford became the second recipient of the Festival of New Trumpet Music's Award of Recognition. Bradford was a revered jazz history professor and taught at Pomona College for over 44 years until he retired last year. Bradford will be performing as bandleader for Stealin’ Home - A Jackie Robinson Suite, which was originally commissioned by the Baseball Reliquary in 2018. He will accompanied by his equally noteworthy Friends Henry Franklin (Bass), Christopher Garcia (Drums, Percussion), Vinny Golia (Alto Saxophone, Bass Clarinet, Baritone Saxophone), Chuck Manning (Tenor Saxophone) William Roper (Tuba, Euphonium, Spoken Word, Vocals, Lyrics) and Don Preston (Piano, Gong) who have each individually performed and recorded with a pantheon of legendary artists.

Combining technical proficiency with a timely and unorthodox approach to composition and performance, Los Angeles saxophonist Sam Gendel came up in the last decade’s jazz underground. Honing his chops and having established himself on the scene using the moniker “Inga,” Gendel began releasing recorded material under his own name in 2017, producing a variety of experimental projects both individually and in collaboration with his contemporaries, notably releasing two of his albums in 2020 on storied New York label Nonesuch. He will be performing with noted Los Angeles- based guitarist and producer Blake Mills, whose work spans contributions to albums by such notables as Alabama Shakes, John Legend, and Jim James. Gendel and Mills collaborated on the recent and much-lauded Blake Mills and Pino Paladino album "Notes With Attachments". Also in the trio performing at Union Station will be sought-after keyboardist, composer, producer and sound designer Benny Bock. This is their first show together.

Joey De Leon has worked as a percussionist with jazz and Latin jazz legends for over 20 years, performing and recording with artists such as Poncho Sanchez, Arturo Sandoval, Jimmy Smith, Joey DeFrancesco, and Queen Latifah. Now he has embarked on a leadership role, bringing to it the fire and unbridled energy he has long been known for. His playing deftly captures his charismatic personality and his passion for music and life. Performing alongside him in his newly-christened De Leon Division as he leads this performance will be featured vocalist Maiya Sykes, Rene Camacho (Bass), Quinn Johnson (Piano), Tom Luer (Saxophone), Alfred Ortiz (Conga), Aaron Serfaty (Drums) and Melena Frances Valdes (Percussion).

Metro Art Presents showcases an exciting array of arts and cultural programs at historic Union Station. All events are free and open to the public. For more information visit: metro.net/art

Union Station is accessible via Metro Rail, Metro Bus and several municipal bus lines. Use the Trip Planner at metro.net for routes and connections. Car and bicycle parking are also available on site.