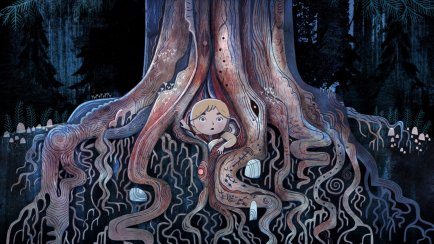 This screening is free and open to the public. Seating will be on a first-come, first-served basis. Special guest introduction by artist, animation director and filmmaker, Lyndon J Barrois.

From the creators of the Academy Award®-nominated “The Secret of Kells” comes a breathtakingly gorgeous, hand-drawn masterpiece. Based on the Irish legend of the Selkies, “Song of the Sea” tells the story of the last seal-child, Saoirse, and her brother Ben, who go on an epic journey to save the world of magic and discover the secrets of their past. Pursued by the owl witch, Macha, and a host of ancient and mystical creatures, Saoirse and Ben race against time to awaken Saoirse’s powers and keep the spirit world from disappearing forever. As enthralling for adults as for children young and old, Song of the Sea is a wonder of magical storytelling and visual splendor that is destined to become a classic.

In honor of National Arts and Humanities month, this series examines different animation techniques that have paved the way for the genre. Moore expressed that the visual influences going into the hand-drawn 2D animation film were meant to “add was a sense of the ever-changing light and skies and the damp atmosphere in Ireland.”