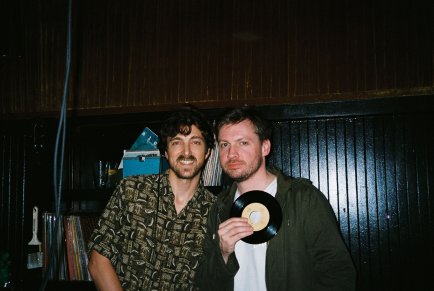 Join us for luscious, danceable grooves underneath the night sky complemented with visual projections at one of LA's majestic landmarks. The events will also include a drop-in silkscreen stencil workshop led by Self Help Graphics & Art, a photo booth and food trucks. Snacks and libations from Café Crepe.

This event is FREE and OPEN to the public, no RSVPs required.

Heat-Wave is a Los Angeles based party series founded by DJs Daniel T. and Wyatt Potts, with a focus on international funk and disco records.

Since launching in 2016, Heat-Wave has hosted guest DJs from all over the world including Japan, Brazil, Korea, Mexico, Armenia, Greece, Germany, and India. This blend of international guests has not only shaped the Heat-Wave sound, but has also brought a unique mix of music lovers together under one roof for the same cause. Heat-Wave can be found Thursday nights at Gold Diggers and monthly on NTS Radio.

Norio is the owner of the Rare Groove record store in Osaka, Japan. The shop features a wide selection of musical styles from all over the world. Recently, Vinyl Factory named Rare Groove as one of the World’s Best Record Shops, and “one of the city’s ﬁnest establishments for leftﬁeld dance music, new wave, decades old Japanese pop and colourful cuts.”

Norio’s rare grooves can be heard on dublab, NTS, Redlight Radio, Noise In My Head, Sanpo Disco, Krossﬁngers, Butter Sessions, Quartet Series and more. In addition, he runs the internet radio station Revelation Time with his partner Az, which features both local DJs and guest DJs from overseas.