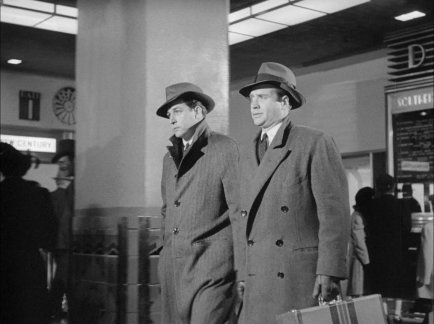 The first in our Film Noir at Union Station series in collaboration with the Film Noir Foundation, we are pleased to present "UNION STATION” (1950, Paramount, 80 min. Dir. Rudolph Mate). This taut thriller features plenty of memorable set piece scenes filmed inside Los Angeles’ historic Union Station and other L.A. locations that double for the film’s Chicago setting. William Holden and Barry Fitzgerald star as the dogged cops who must flush out the psychopathic kidnapper (Lyle Bettger) of a young blind girl without causing a rush-hour panic. Also starring Nancy Olson and Jan Sterling.

All films in the series feature scenes shot at Union Station.

We are pleased to welcome writer, historian, film programmer and film noir expert Alan K. Rode to introduce the film.

The mission of the Film Noir Foundation is to rescue and restore America's Noir Heritage. More information at www.filmnoirfoundation.org

Next in the series: