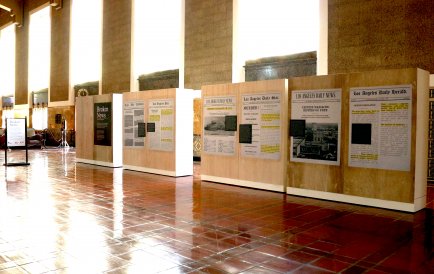 As part of public programming to recognize the 150th Anniversary of the Chinese Massacre of 1871 in downtown Los Angeles, the Chinese American Museum, Chinese Historical Society of Southern California and Metro Art are co-presenting an exhibition titled Broken News in Union Station through October 29.

A project by Adit Dhanushkodi, Broken News portrays the deeply troubling vein of anti-Chinese sentiment in the popular press – as relevant today as it was in 1871. Cultural organizer Rosten Woo and historian Eugene Moy served as advisors on this exhibit, which is presented in conjunction with the 1871 Steering Committee of the LA Mayor’s Office Civic Memory Working Group.